La Festa della Repubblica Italiana (Italian National Day) is celebrated annually on June 2 in commemoration of the 1946 referendum where Italians went to the polls to decide on what form of government they would like to have following World War II and the fall of fascism. On this day, 12, 717,923 votes were cast in favor of a republic, while 10,719, 284 were cast hoping to retain the monarchy. Following this vote, the male descendants of the House of Savoy were sent into exile.

Commemorations for the Festa della Repubblica begin at the Altar of the Fatherland monument in Rome and include a military parade. Celebrations also take place at all Italian embassies and many Italian cities celebrate as well.

In one Facebook group focusing on Irpinia that I belong to, La storia di NUSCO raccontata da Gianni Marino, sociologist and historian Gianni Marino talks about our area, often highlighting its place in overall Italian history and culture. While the group centers around his hometown of Nusco, it also includes a wealth of information about the other towns that comprise the Province of Avellino.

Today, in honor of the Festa della Repubblica, Signore Marino posted the below graphic, highlighting which towns in Irpinia voted in favor of a republic back in 1946. It is clear that, although the vote was close, the people of Irpinia were convinced that a republic was the best course of direction for postwar Italy. 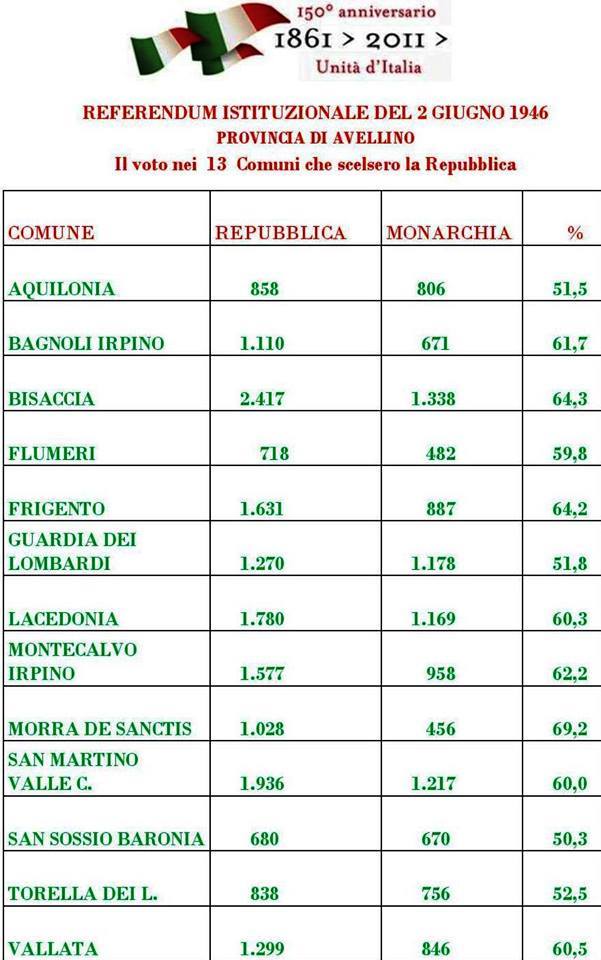 Signore Marino also told the story of two “partigiani” (partisans, or members of the anti-fascist resistance movement) who were from Nusco. The first was Amato Di Paolo, who was stationed in Piedmont and Liguria. He was born in Nusco on December 22, 1919 and was a farmer– he was unable to read or write. He responded to the draft and was stationed in Montenegro as well as in France during World War II and found himself in the position of having to declare himself as either a fascist or German sympathizer or a partisan. Because of his courage in vocally choosing to be a partisan, he was celebrated upon his return to Nusco after the war and given the title of “Fighting Partisan” (“Partigiano Combattente”). He eventually left Nusco for good in 1948 to work in Northern Italy and died in Alessandria (Piedmont) in 1976.

The second partisan of Nusco was Argenio Romagnoli (nicknamed “Genio,” deriving from his first name but also meaning “genius” in Italian). Like Amato, Genio was also a farmer, but he completed up to the second level in elementary school. He joined the Italian military in 1938, but because of an injury was limited to sedentary work. After he recovered, he was sent to be a border guard near Venice. Genio also held other positions in the military and, like Amato, was also a confirmed partisan. After the war, he eventually lived in Lioni, also located in Avellino Province, dying there in 1965.

Signore Marino is continuing to research the lives of these, and other, partisans from Nusco– this is a wonderful way for people to remember the Italian resistance during World War II and to see how it truly did touch every section of Italy, including Irpinia!